STRINGS IN THE WOODS 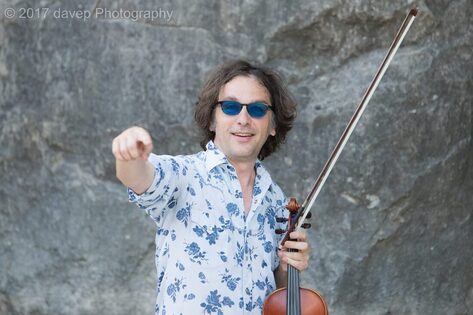 Will Taylor
Violinist, composer, and Austin Music Award winner Will Taylor has performed with Pearl Jam, Grammy award-winning Shawn Colvin, P-Diddy, Willie Nelson, Ronny Cox (Deliverance), and many more. Will grew up and raised his kids in Austin, played in the Austin Lyric Opera orchestra, and leads a musical ensemble, called Strings Attached, that has been a cornerstone of the Austin live music scene for over two decades.

He has also driven/guided folks around Austin via Uber for the past few years, drawing on his "insider's" knowledge of this fantastic city. Being an ambassador suits Will's extroverted and sparkly personality. He loves getting to know people & their passions, answering questions about Austin and its culture, and bringing people together for connection and exquisite musical moments.

Karen Mal sings. From raw sensuality to shimmering bell-like clarity, her voice is both tender and powerful, and as effortless as a waterfall. There's a river that flows between Karen and her audience. It's about love. The possibility and the unbearable beauty of it; elusive and abundant at the same time.

Based in Austin, TX, Karen has created a name for herself as a captivating singer, instrumentalist and songwriter. Ranging from charming to seductive, impressionistic to philosophical, her songs have brought her nationwide acclaim. Shes won top awards from the Wildflower Arts and Music Festival in Texas, the Tucson Folk Festival and the Portland Songwriters Association and has also been a three time New Folk Finalist at Kerrville, emerging artist at Falcon Ridge and a finalist at the Sisters Folk Festival.

When she's not singing her own songs she's in high demand as a mandolinist and bassist appearing with Ronny Cox, Buddy Mondlock, Jonathan Byrd, Sam Baker, Ken Gaines and many, many others at Kerrville, Woodyfest and stages across the country. Karen has worn so many hats for so long, that on stage, theres nothing she cant do. You dont just get hot licks; you get melody, counterpoint, and a sense of rhythm that eases the whole sound deeper into the groove. Just ask Celtic superstars Cherish the Ladies who invited Karen to tour with them in 2005.
How it works
Check Dates